Dunning-Kruger Effect vs. Imposter Syndrome and How To Defeat Them Both 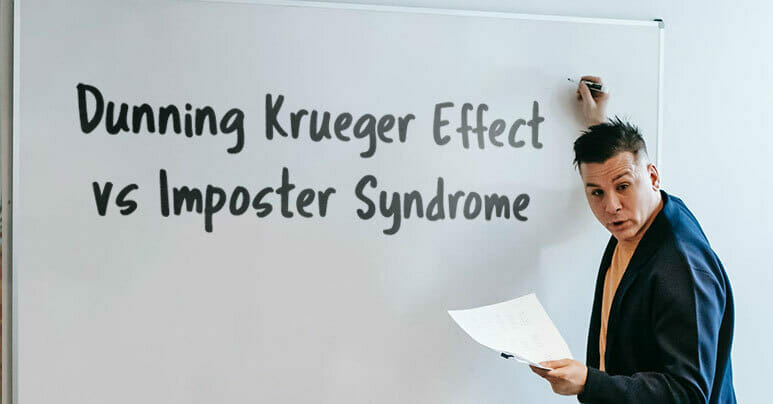 Let me ask you something…

Have you ever been in a situation where you just started learning all about a new topic and felt so freakin’ confident that you believed you hit the peak of your own genius? And then you suddenly stumbled into a rabbit-hole of information that you knew nothing about?

And upon finding this new data, did you spiral into a negative loop of self deprecation? Maybe you even lost interest in a topic that you thought you adored … all because you just discovered the topic was actually so much bigger than you thought?

And if you didn’t just throw in the towel, maybe you started studying more. As you learned more, you felt that feeling of a small victory … a sense of accomplishment that piqued interest and gave you the momentum to keep learning?

If you said yes, then you’ve just been Dunning freakin’ Krugered!

I know that was a lot to take in and understand, but let’s break it down a little bit for you so you won’t be so overwhelmed with all this new information you didn’t know about!

The Psychology of Being a Know-nothing

The Dunning Kruger Effect is a psychological phenomenon that is known to absolutely destroy a person’s preconceived notions of themselves, as well as inherently irritate the people who actually are the experts in their field.

It’s like being at the top of a hill on a roller coaster, thinking the ride has come to an end already only to realize you actually were at the peak of Mt. Stupid and getting ready to ride the slippery slope all the way down. 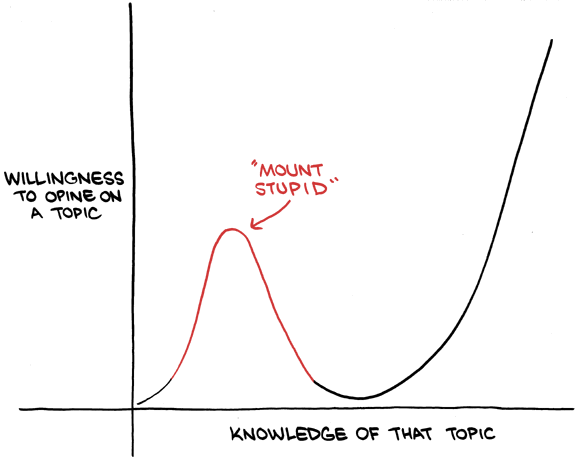 You see, with our ability to conjure up analytical data and facts at the tap of a button, it can seem easy to feel like the subject matter expert when you are first learning a new topic, but that feeling has diminishing returns.

Once you’ve broken the threshold of “thinking” you know everything, and instead, have reached a point of self-awareness where you realize you actually haven’t got a clue - your emotions will begin a downward spiral.

t’s only when we are aware of our own bias and knowledge where true wisdom can be found.

Wisdom can be thought of as having both experience in a subject field and also the knowledge learned and gained with these experiences.

“Wisdom is a lens through which we can look to truly understand confidence.” - Timothy September

This is the difference between the confident motivational speaker who can captivate an audience and a person who’s a nervous wreck, shaking profusely and fumbling their way through their words.

The confident motivational speaker has already gone through the experience of knowing the potential mishaps and situations which could arise. Thus, he has the knowledge of being able to overcome them.

In other words, their mind has little to worry, feel nervous, or experience anxiety over because they’ve already “been there - done that.”

The nervous wreck has yet to fully understand what they are really getting into, what to expect, or how to react to problems.

Of course you probably already know that when someone practices, they become better at what they are practicing. However, at what point does the knowledge and experience turn into wisdom?

Imagine that the nervous wreck and the confident, experienced motivational speaker find themselves in a room together.

The experienced motivational speaker has just finished with his presentation. He takes a seat next to the  and sits down next to the nervous wreck.

The nervous wreck looks over and says, “Hey friend...can I give you some tips on presenting better next time?”

When it comes time to present though, the nervous wreck absolutely loses his cool, shakes like a leaf, forgets his prompts, and ultimately loses the fascination of the crowd.

Struggling to finish his presentation, the nervous wreck sits back down. Downtrodden and profusely sweating, he turns to the experienced speaker and says, “Wow...you really made it look easy…”

“Well yeah,” says the experienced speaker…”I’ve been doing this for about 10 years... once you realize that there is way more to this than just talking to a crowd of people, it gets easier and easier…”

This is the plateau of the Dunning Kruger Effect...and it’s from here that two things will typically happen.

The nervous wreck will either:

A) Realize they really have no idea what they are doing and give up entirely.

B) Realize they have much more to learn and will stick with it until they are as cool and collected as the experienced speaker.

The Steps to Overcoming the DK Effect

Now that you have a better understanding of the Dunning Kruger effect. But keep reading. Don’t go off thinking you already know everything about it!

Trust me, there is actually a lot more to this than I’m explaining, however I’m self-aware enough to know that I don’t know enough about it - and you should too!

The first step to overcoming the Dunning Kruger Effect is to know what the steps are and to be aware of them. Moving from one step to the next step requires some kind of information discovery.

This first step is where we all start. In the beginning we don’t even realize that a topic exists. So we’re unconsciously ignorant. To move beyond this step, we must only become aware of our own ignorance.

This step is all about building our awareness of a topic. It’s usually during this step where a person will binge watch, study, and attempt to absorb any and all information they can about this new subject they have just become aware about.

They will spend several days and maybe even weeks, studying and learning as much as they can, discussing their findings, and appealing to the ignorant masses (because THOSE people also have probably never known about this information either).

Feeling inspired in their genius, it’s usually here where a person may find themselves on a slippery slope toward illusions of grandeur, until they meet somebody who has way more knowledge and experience in this particular field of study.

That’s when they hit step 3.

It’s during this phase that a person may inadvertently begin discussing the particulars of their new found topic, only to realize the individual whom they decided to engage in conversation with is actually a REAL subject matter expert on the subject matter they thought they were the expert in.

Those grandiose ideals they held in their minds regarding their own intelligence are suddenly met with a swift verbal slap in the face by the world champion of face slapping - who also happens to be the subject matter expert.

To those who were unaware about your newly found topic - you probably sounded like a bonafide genius!

To those who are completely aware of and are experts about the topic you just learned about - you sound like a bonafide bone-head!

Step 4: Is it really Imposter Syndrome aka “Am I just faking it till I make it?”

If, after Step 3, someone decided, “You know what... this isn’t really for me…” they’ve probably already given up and made the choice to move on.

However, Step 4 happens when a person decides, “You know what... I don’t know everything yet, but I’m willing to give it a go.”

This step only occurs when a person decides to stick with it and continue the journey toward more understanding.

It’s during this step where more knowledge, experience, and understanding can allow someone to shift into starting to become a subject matter expert. They might take classes, interview experts in the field, and begin to really use the information they’ve gathered.

Someone in Step 4 will go through ebbs and flows of, “Wow I’m starting to get it!” and “Holy crap I still have no idea what I’m doing!”

Imposter Syndrome, in a nutshell - is when you have plenty of knowledge, experience, and information about a particular subject that you would be considered a subject matter expert by the general population…

...Yet, because of your earlier experience with the DK effect, you have a fear of still not being smart enough or capable enough of considering yourself as the subject matter expert.

(Show imposter syndrome inside a nutshell)

A person experiencing Imposter Syndrome may feel overwhelmed, fearful, or end up in a perpetual loop of, “I don’t know enough yet…”

This is where that Lens of Wisdom is used that we discussed because there is a final step in the DK effect which is where it all ties together.

If you’ve made it this far - congratulations! You’ve overcome both the Dunning Kruger Effect AND Imposter Syndrome!

You see, Step 5 is about knowing that you are confident enough to openly discuss all of your knowledge, experience, and expertise about a subject.

It’s at this important Step where you are aware there is always room for growth and more to learn, however, you can definitely hold your own in a conversation with other subject matter experts.

It’s here where the student has ultimately become the master.

A person who is stuck in Step 4 (Imposter Syndrome) may never really achieve true mastery because they will constantly think they aren’t good enough or have enough information to confidently talk about the particulars of the subject.

However, once you’ve reached Step 5 (Mastery) you know that other people might be more experienced or knowledgable than you, however you are confident enough to be able to openly discuss the information you already have.

In reality - Step 4 & Step 5 are the exact same - the only difference is that Mastery comes with the confidence in knowing you’ll never know everything. And that’s OK. Whereas someone with Imposter Syndrome believes that they’ll never know enough. So they never become comfortable or confident.

Both people have their own wisdom.

The difference between them is one feels confident in their wisdom and the other doesn’t.

How to Naturally and Effectively Defeat the DK Effect & Imposter Syndrome

So how do we handle both the Dunning Kruger Effect and Imposter Syndrome?

In the world of hypnosis we have plenty of tools to help somebody feel more confident and capable. Some examples are:

The best part though, is that with self-hypnosis you can do all of this on your own!

Interested in learning how you can really, and I mean really shift into true Mastery?

Check out the link below to get started!